The new tax reform act is within reach of President Trump’s pen. Questions are swirling and Americans want to know what it means for them. I’ve borrowed the following information from Kelly Phillips Erb from Forbes. It’s a very clear description of what will happen to a great many of your former deductions. (unless you were just taking the standard deduction)

With all of the focus on new tax rates after Congress green-lighted tax reform (you can see those new rates here), it’s easy to forget that some of the biggest changes don’t have anything to do with tax rates: They’re about deductions.

Initially, the change in the standard deduction amounts was meant to simplify the deduction scheme. In other words, most of the itemized deductions would have simply disappeared, leaving behind (initially) the charitable donation deduction and the home mortgage interest deduction. Over the past few weeks, however, those itemized deductions – those found on a Schedule A – have been tweaked. 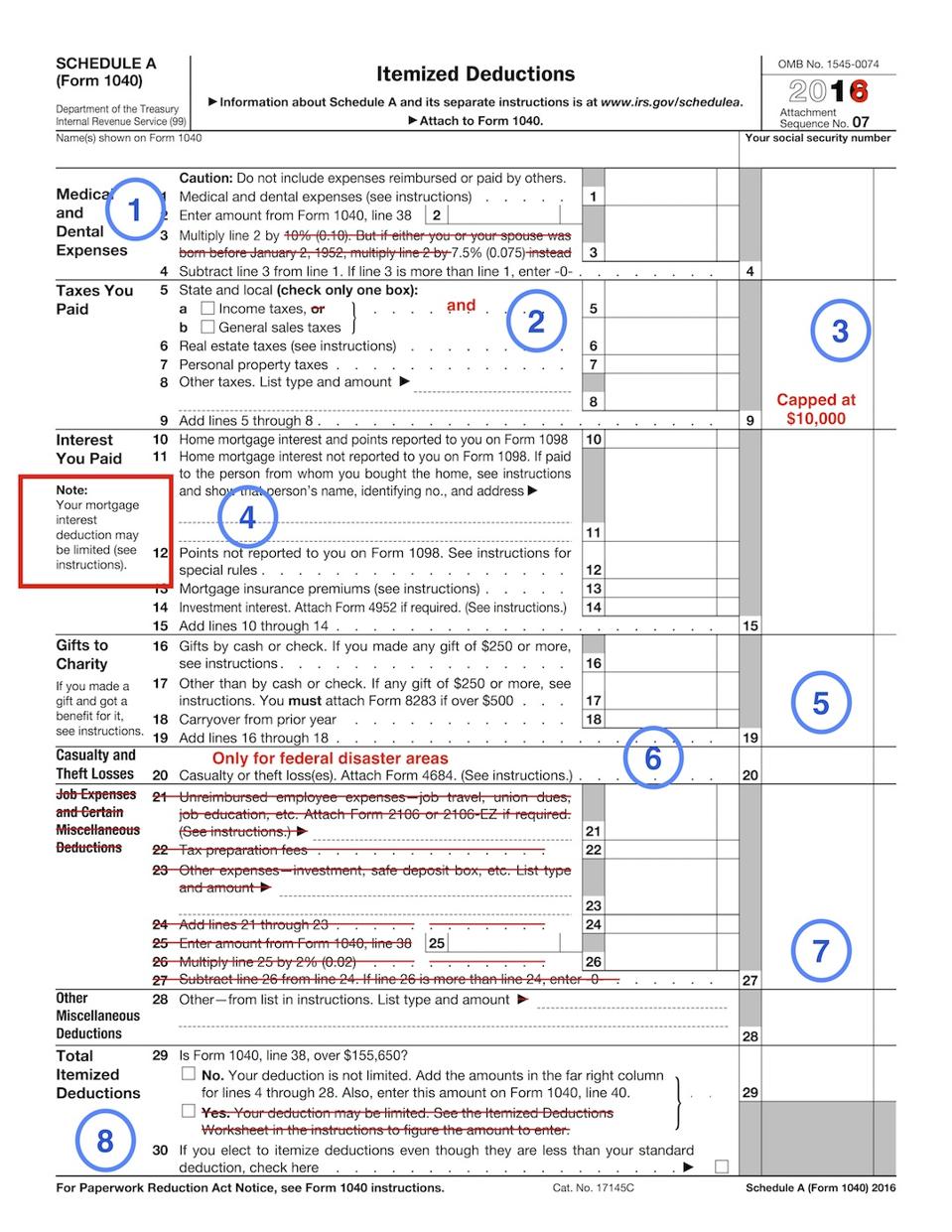 Here’s how Schedule A will be affected for the 2018 tax year following tax reform (numbers correspond to the numbers in the blue circles on Schedule A):

Again, unlike most of the provisions in the bill, the provision is effective retroactively to the beginning of this year – so you’ll see this change on your 2017 and your 2018 tax returns.

2. State and Local Taxes. Under tax reform, deductions for state and local sales, income, and property taxes normally deducted on a Schedule A remain in place but are limited (see #3 below). Foreign real property taxes may not be deducted under this exception.

3. SALT caps. While SALT deductions remain in place, there is a cap on the aggregate, meaning that the amount that you are claiming for all state and local sales, income, and property taxes together may not exceed $10,000 ($5,000 for married taxpayers filing separately).

State, local, and foreign property taxes, and sales taxes which are deductible on Schedule C, Schedule E, or Schedule F are not capped. This means that, for example, rental property – even if held individually and not in a separate entity – remains deductible and not subject to these limitations.

And yes, Congress already knows what you’re planning, so amounts paid in 2017 for state or local income tax which is imposed for the 2018 tax year will be treated as paid in 2018. In other words, you can’t pre-pay your 2018 state and local income taxes in 2017 to avoid the cap. There is not, to date, a similar restriction for property taxes.

And here’s where that definition is super important: For tax years 2018 through 2025, there is no deduction available for interest on home equity indebtedness.

5. Charitable donations. Charitable donations remain deductible under tax reform. The rules are largely the same with a few changes. First, the percentage limit for charitable for cash donations by an individual taxpayer to public charities and certain other organizations increases from 50% to 60%. Two, taxpayers are no longer entitled to deduct payments made to a college or college athletic department (or similar) in exchange for college athletic event ticket or seating rights at a stadium. Those provisions are effective beginning in 2018.

Effective beginning in 2017, the provision which allows for an exception to the substantiation rule if the donee organization files a return is repealed. What this means to taxpayers: Always get a receipt.

The charitable standard mileage rate will not be adjusted for inflation under tax reform. It remains at a disappointing 14 cents per mile (for other mileage rates, click here).

6. Casualty and Theft Losses. The deduction for personal casualty and theft losses is repealed for the tax years 2018 through 2025 except for those losses attributable to a federal disaster as declared by the President (generally, this is meant to allow some relief for victims of Hurricanes Harvey, Irma, and Maria).

For more on casualty losses after a disaster, click here.

7. Job Expenses and Miscellaneous Deductions subject to 2% floor. Miscellaneous deductions which exceed 2% of your AGI will be eliminated for the tax years 2018 through 2025. This includes deductions for unreimbursed employee expenses and tax preparation expenses. To be clear, it includes expenses that you incur in your job that are not reimbursed, like tools and supplies; required uniforms not suitable for ordinary wear (like those ABBA costumes); dues and subscriptions; and job search expenses. These expenses also include unreimbursed travel and mileage, as well as the home office deduction.

8. Itemized Deductions. The overall limit on itemized deductions is suspended for the tax years 2018 through 2025.

The information in this post comes from Kelly Phillips Erb (@taxgirl) from Forbes online. https://www.forbes.com/sites/kellyphillipserb/2017/12/20/what-your-itemized-deductions-on-schedule-a-will-look-like-after-tax-reform/#72f07d0f6334