Curious as to what the new postcard-sized tax return might look like? The Internal Revenue Service (IRS) has released a proposed draft of the return. It looks like this: 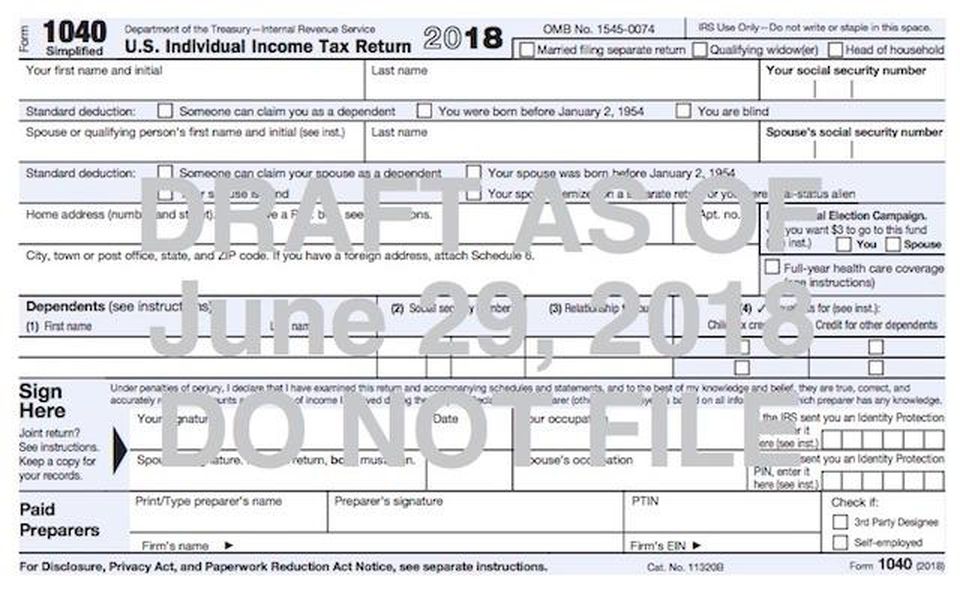 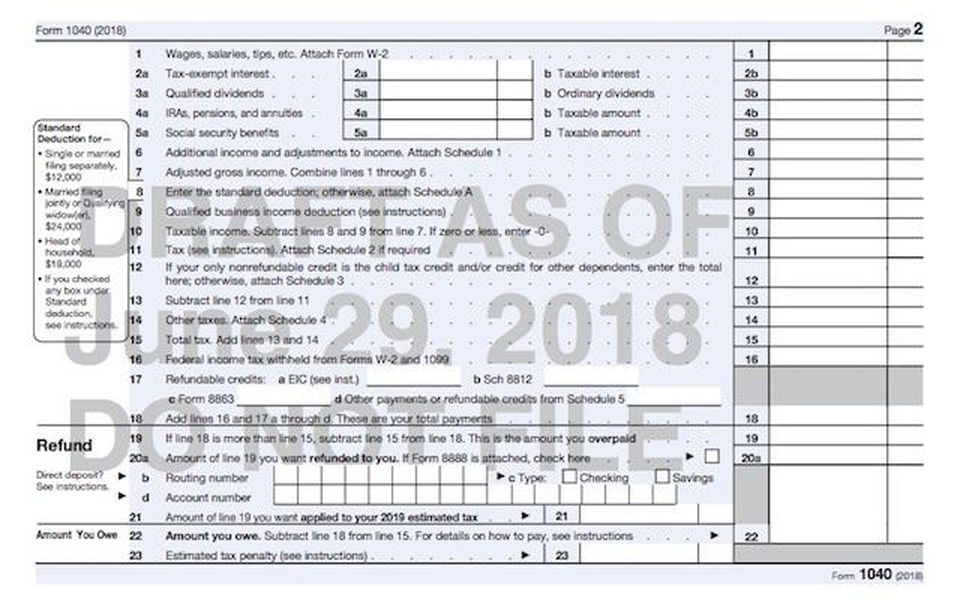 You can see the full-sized copy here (downloads as a pdf).

But don’t start printing copies yet. The IRS warns:

This is an early release draft of the 2018 IRS Form 1040, U.S. Individual Income Tax Return, which the IRS is providing for your information, review, and comment… Do not file draft forms. Also, do not rely on draft forms, instructions, and publications for filing.

The IRS goes on to say:

We generally do not release drafts of forms until we believe we have incorporated all changes. However, in this case we anticipate it is likely that this draft will change at least slightly before being released as final. Whether this draft changes or not, we will post a new draft later this summer with our standard coversheet indicating we do not expect that draft to change.

You’ll note that the two-page draft form is smaller than the current two-page form, but that’s because many line items have been consolidated and/or shifted to other forms and schedules. Here’s how the current and draft forms are alike and how they differ:

Wait? Schedule 3? What happened to Schedule 2? The reference to the new Schedule 2 appears on line 11 where you figure your tax. The form 1040 advises you to “see instructions” (as before) but now adds “Attach Schedule 2 if required.” Schedule 2 is just a reconciliation schedule. You can see it here (downloads as a pdf).

Schedule 3 is also a reconciliation schedule. You can see it here (downloads as a pdf).

You can see Schedule 4, which combines other taxes due, like Medicare and Social Security taxes, household employment taxes, and the Net investment income tax here (downloads as a pdf).

You’ll note that the new schedules use numbers for identification purposes. That’s because the schedules which use letters, like Schedule C, are still in play. Those will be modified to reflect changes in the tax law, but we haven’t seen drafts of those just yet.  You can see what I think Schedule A will look like here.

And we’re not done with new schedules yet:

If you have comments about the draft 1040, you can email those to WI.1040.Comments@IRS.gov. The IRS cannot respond to all comments due to high volume.

Of course, most of this is ceremonial, right? Nearly 90% of taxpayers are expected to use a tax preparer or file electronically, making the length of the tax form more or less moot. But a postcard-sized return sure looks good in a campaign ad.

The IRS posted more than 50 drafts of revised forms and new schedules on its website this month. Many of the changes are tied to the Tax Cuts and Jobs Act, or TCJA (you can read more on those changes here and see the new tax rates here). In her report to Congress, National Taxpayer Advocate (NTA) Nina E. Olson called the implementation of the TCJA the IRS’ “most significant challenge” of 2018 (you can read more about the report here).

The information in this post is from Kelly Phillips Erb, The Tax Girl, writing for Forbes. https://www.forbes.com/sites/kellyphillipserb/2018/06/30/heres-how-the-new-postcard-sized-1040-differs-from-your-current-tax-return/#1da0289646cc